Mount Mombarone (2.371 m), together with its satellite peaks, Mount Cavalgrosso (2.231), Mount Cavalpiccolo (2.189 m) and Punta Tre Vescovi (2.344 m), mark the beginning of the mountain part of the Dora Baltea basin: Aosta Valley.
Its slopes are drained by the Chiussuma, left tributary stream of the Dora Baltea and by the Janca and the Viona, right tributaries of the Elvo, in the territory of Biella.
Punta Tre Vescovi (Three Bishops Peak), around 400 m north-east from the main summit of Colma di Mombarone, is the spot where provinces of Turin, Biella and Aosta meet (and, after the name, also the three dioceses of Aosta, Biella and Ivrea).
From the southern slopes starts the Serra Moraine of Ivrea, the large side moraine built by the glacier poured out from Aosta Valley during its last glacial phases.

The watershed crest Elvo-Dora Baltea, after the clear cut of Colle della Lace, goes north toward Mount Mars.
In 1900 a great statue of the Redeemer was built on the very summit of Mombarone and it is still there nowadays.
Mount Mombarone can be seen from very far and its imposing mass dominates most part of Canavese and Biellese regions. 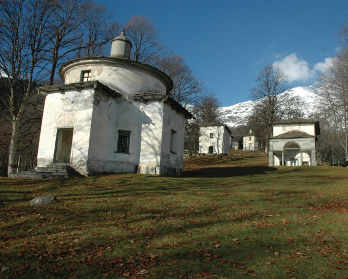 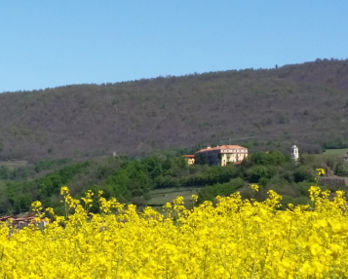 The natural embrace of the Morainic basin…